Disclaimer: I received an entry to the Rock N Roll Las Vegas Marathon Weekend as a part of the BibRave Pro (Ambassador) Program. To learn more about becoming a BibRave Pro (ambassador), and check out BibRave.com to review find and write race reviews!

It was a chilly, and early fall morning as I was headed towards the airport to go run my bucket list race. Rock N Roll Las Vegas. I had been looking for this moment for years, but honestly, once the weekend came. I had zero desire to go. I would later find out that this was most likely the result of me coming down with something other than my usual pre race sickness (and the anxiousness of flying on Spirit Airlines for the first time more to come on that later), that just made me really tired… and cold.

But whatever, I arrive, get my needed items from the airport and head straight for the expo. I opted to rent a car since I knew I wanted to venture away from the strip, and they were so cheap it was better to have a not need, versus need and not have. Plus I was actually staying off the strip to keep costs down so it came in handy.

The expo was your basic large major race expo, but of course there’s just so much more glamour that comes with RnR races whenever Brooks has their giant shoe display and items to buy. I can officially thank Spirit Airlines here for keeping my bank account in check, since I knew anything I brought back would have to fit into my backpack. The process was quick and easy to pick up the bib, right at the entrance before you even officially got into the expo, they had laptops, and paper to look up and record your bib number to get your packet. This is also when you discovered your corrals. For whatever reason, I was automatically placed in the last Corrals for BOTH races.

I know I’m not fast, but I did enter a 1:10 10k pace… about 11:15ish per mile, and 30 minute 5k about 10:30ish per mile. Definitely not last corral times. Fortunately it was easy to loop back around and go to the table to have them changed. “Mama T”  was amazing at helping me and we both looked at the finish time and corresponding corral times, and discovered that I really belonged in corral 4 for the 10k, and corral 10 for 5k versus 10 and 23 respectively.

I bought a few items, took some pictures at the New Balance booth with Heather…Yup the Heather… I FINALLY met Heather after social media friends for so long. Let me just say, she is equally as nice in person as she is on social media and I wish I had more time to hang out with her.

After this I went and dillydallied, checked into the hotel and took a nap before the 5k that evening.

It was a 6pm start and the races recommended that all runners take the monorail. I took an uber to the MGM (about 5 miles away), and got onto the monorail to take it down to SLS. I did not realize how long it would take my. Uber to make the trip (I left the hotel at 5), and made it on to the monorail with about 30 minutes to spare. But it was a pretty uneventful trip, not super crowded and easy. Walked through the hotel and casino and across the street to the starting line at the festival grounds. 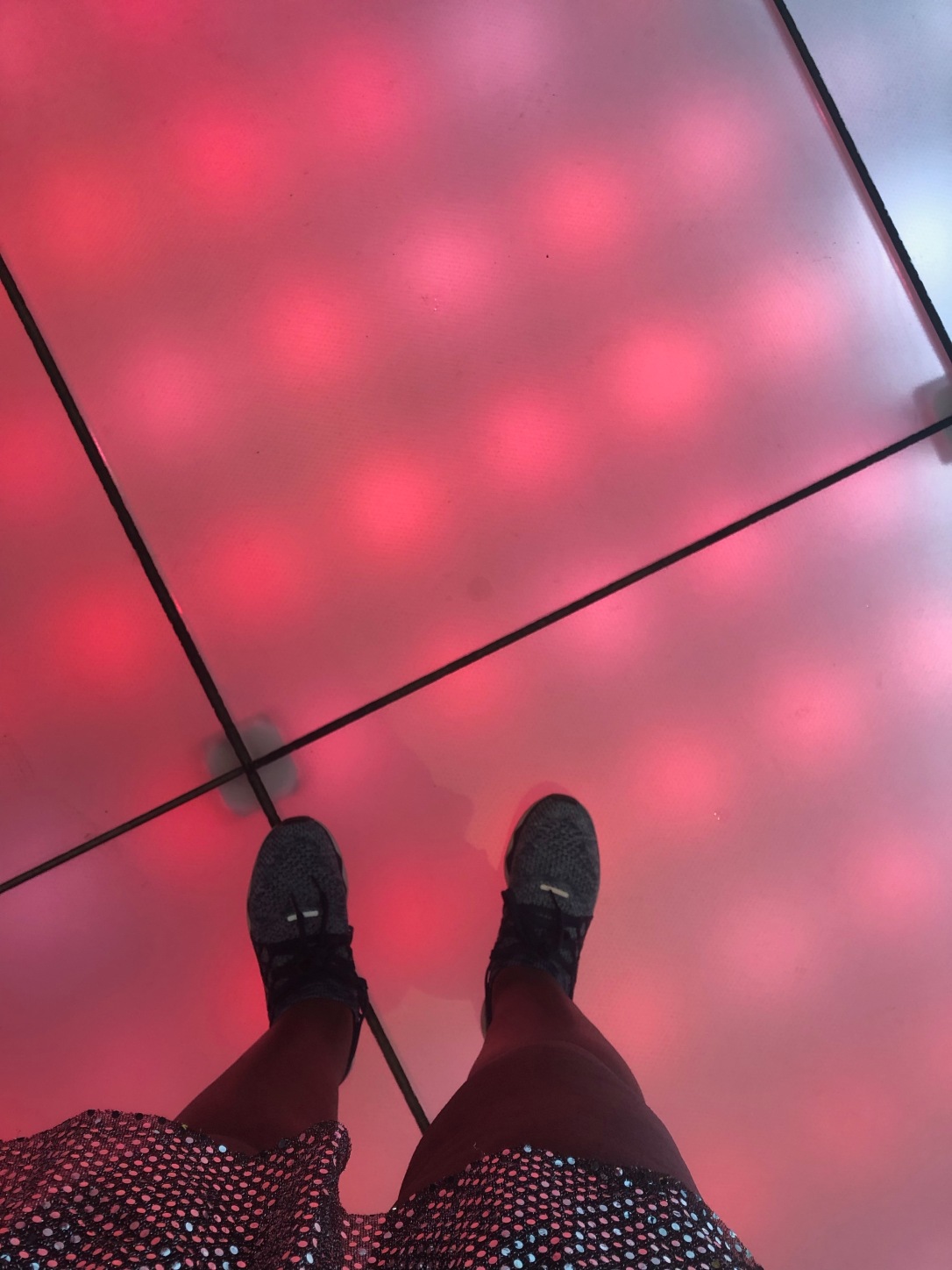 They really needed more signage. Several runners and myself, had no idea which direction to really walk in since there was not an iconic start line arch, or signs directing us.

I just happened to look up to see white balloons high in the sky with corral numbers and knew that was the they way to go.

The 5k was flat, out and back, organized, and crowded… but still fun. It was the perfect shakeout run. Lots of entertainment and some pretty good views of the strip at the turnaround point. My only true complaint is when you’re running in, and you think you’re done… it’s dark. And you’re just running in a snake formation through the grounds to get to the finish.

At one point towards the end it was dark and there was a food light pointed directly at the runners which made it hard to see what was actually in front of you. But… regardless I finished. Typical post race banana, water, and granola bar greeted me and I was done. They did have a few concessions open which was nice. But my $6 corndog was small and gross and threw it away because it tasted like soap. They also had a concert for the 5k featuring Ozomatli, but I opted to skip it as I was still on Texas time and super tired.

After barely making it to the 5k start I started my journey down to the 10k an 1 1/2 before I needed to be there, since I needed to use gear check which closed at 3:45. It started at the same place as the 5k, so same thing again. Unfortunately my Uber could not get me as close this time, which wasn’t a big deal since I still probably spend the same amount of time walking since I actually knew where I was going this time. But the line was insane.

I stood in line just to get on the monorail for 20-30 minutes. Fortunately it was organized and they had extra staff there, it was just time consuming to the large number of people, and there’s nothing that RnR can do about that, or the Las Vegas Monorail.

Needless to say I made it with 5 minutes to spare so I just decided to carry my bag (it had my long sleeve shirt for post race after discovering how cold I was after the 5k)… especially since I couldn’t even see any signs for the gear check anyways.

I was fine with not starting at 4 due the fact that it was supposed to be a corral start and I wouldn’t go until 4:10 anyways. Walking over to find some sort of signage I remember hearing the announcer saying they would be starting the race as one giant corral. I thought they were joking but…

So we all went together and I just jumped in where I could. It was crowded, paces were way too mixed, and even as a run/walker myself… I was frustrated with the walkers. Especially those in groups walking shoulder to shoulder, blocking the way. I threw my hands up in frustration so many times after being cut off multiple times by these groups. But would I let this spoil my time? Goodness no! 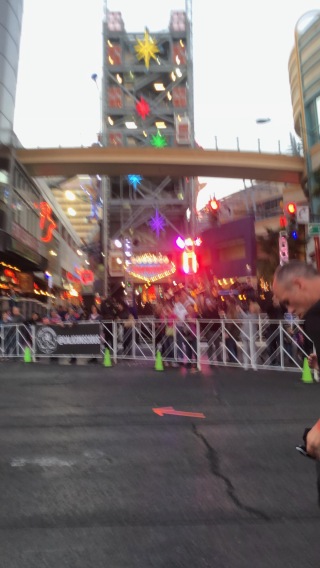 It was such a fun course to be on overall, the vibes from Downtown Las Vegas were irreplaceable. The High School Jazz Band was amazing and we actually passed them twice coming back out of the downtown area.

Let me say this… the 10k experience was great, but it wasn’t exactly what I expected. It was very minimal running on the strip, not as much social media hype, and did not have the same course management (corral start, and not being able to see the headliner as it was BEFORE the half/marathon which started AFTER the 10k), as the other races. It honestly felt like the stepchild event of the weekend. You got the same stuff as the other races, just not as grand. We still got to run on the strip, just not as much, same medal, but obviously with the 10k, and same necessary resources (blocked streets, medical, water, mirage finish, snacks, heat sheets, etc. ) It just wasn’t fully what I expected visually.

While the views in the final stretch, and exit chute made up for it, I still would’ve loved some more time under the the glitz and glamour of Vegas.

With that being said… would I run the RnR Vegas weekend again. Absolutely. Would I run the same races again? Nope… I would trade the 10k for the half marathon to really get the full experience. But overall… it was a pretty darn good time. Now I must ask, did you run this weekend? If so, head over to BibRave and leave your race review to help out fellow runners pick their ideal race!